Last week we released version 0.1.5-4 of the ChainLadder package on CRAN. The R package provides methods which are typically used in insurance claims reserving. If you are new to R or insurance check out my recent talk on Using R in Insurance.

The chain-ladder method which is a popular method in the insurance industry to forecast future claims payments gave the package its name. However, the ChainLadder package has many other reserving methods and models implemented as well, such as the bootstrap model demonstrated below. It is a great starting point to learn more about stochastic reserving.

Since we published version 0.1.5-2 in March 2012 additional functionality has been added to the package, see the change log, but in particular the vignette has come a long way.

Many thanks to my co-authors Dan Murphy and Wayne Zhang.

The vignette is still not finished and your feedback, comments and suggestions will help greatly to move it forward.

Should you find any issues or bugs with the package, then please drop us a line or add them to our issues list.

Here are the changes since the last CRAN release:

To illustrate one of the stochastic methods of the package, here is an example of the BootChainLadder function, which is based on a paper by England and Verrall [1].

The functions bootstraps the chain-ladder residuals R(=999) times and re-estimates the IBNR to provide an approximation of the full distribution. 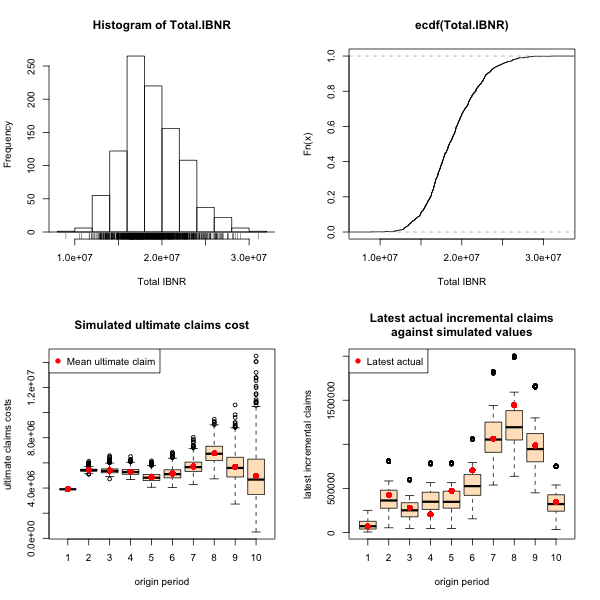 The plot shows four graphs, starting with a histogram of the total simulated IBNRs over all origin periods, including a rug plot; a plot of the empirical cumulative distribution of the total IBNRs over all origin periods; a box-whisker plot of simulated ultimate claims costs against origin periods; and a box-whisker plot of simulated incremental claims cost for the latest available calendar period against actual incremental claims of the same period. In the last plot the simulated data should follow the same trend as the actual data, otherwise the original data might have some intrinsic trends which are not reflected in the model, see also Barnett and Zehnwirth [2].